Since drones have become the most common toy to capture aerial videos the safety of people has become a problem and for the drones themselves too as they are costly equipment. Often has been seen drones falling down. Unfortunately the drone we see today in market are not ready to consider the safety side of technology but rather the drone makers are using all the energies to capture market share only. However, this is not the case with developers for Fleye. Fleye is a product that promises to be among the safest in the world of drones. It has a unique structure, shape and looks much more futuristic than regular quadcopters.

Flying sphere look is friendlier than four-blade flying next to us. Admit that design can be enjoyed. The whole system is enclosed to be harmless to the environment and for its own safely while navigating between people and narrow spaces. The model moves as if it is levitated, and really all the mechanisms are hidden inside the sphere. Probably this will reduce slightly the speed and maneuvers of gadget but still it’s a most friendly drone we’ve seen.

Fleye can be controlled from the controller or smartphone (iOS / Android). You can set modes or control settings, or program it for a “missions”. The Fleye has 5MP 1080p integrated camera and weights 450 grams. The capacity of Fleye seems limited as it has 1500mAh LiPo which bears the 10 minutes flight only. The maximum speed it can achieve is 15km/h. Available to pre-order on Kickstarter the Fleye starts from €599. 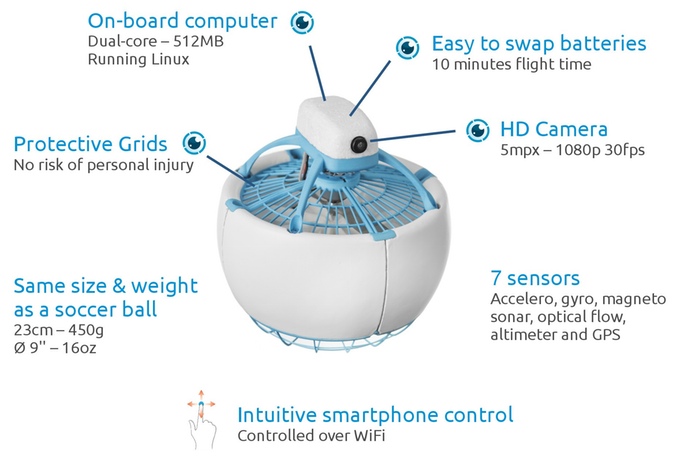